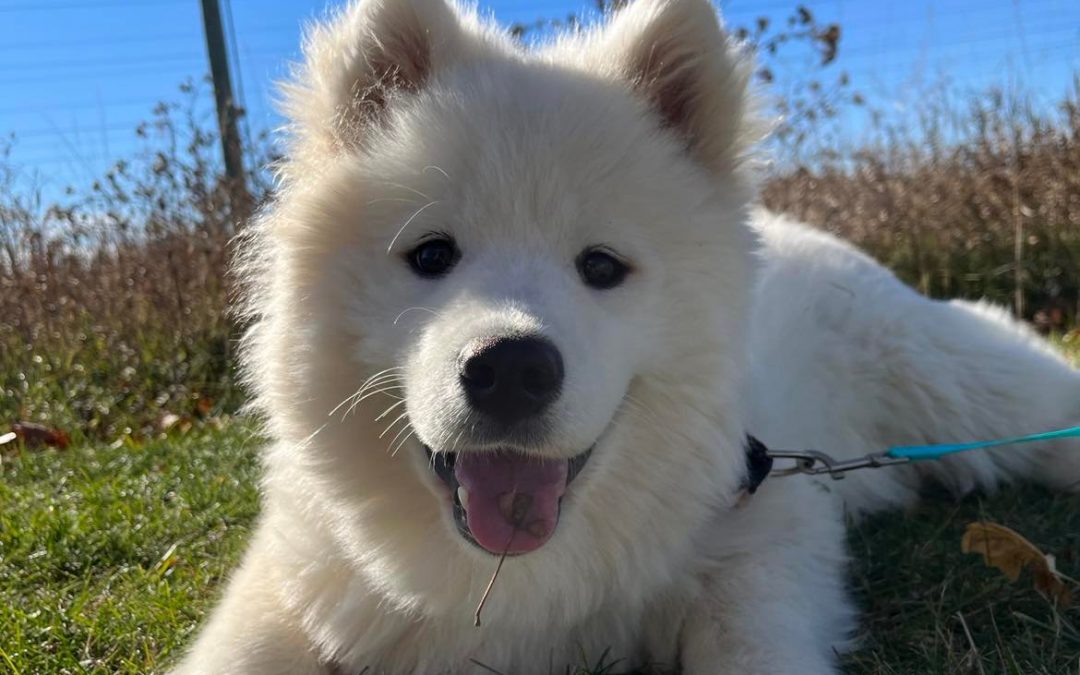 Our favourite days are fur-ever home days—the ones where the furry friends in our care go home with their new families. Eager, full of hope, deeply in love. We use the party emoji in excess these days. Nothing is better than a pet finding its people.

Here are a few of our favourite fur-ever home updates. 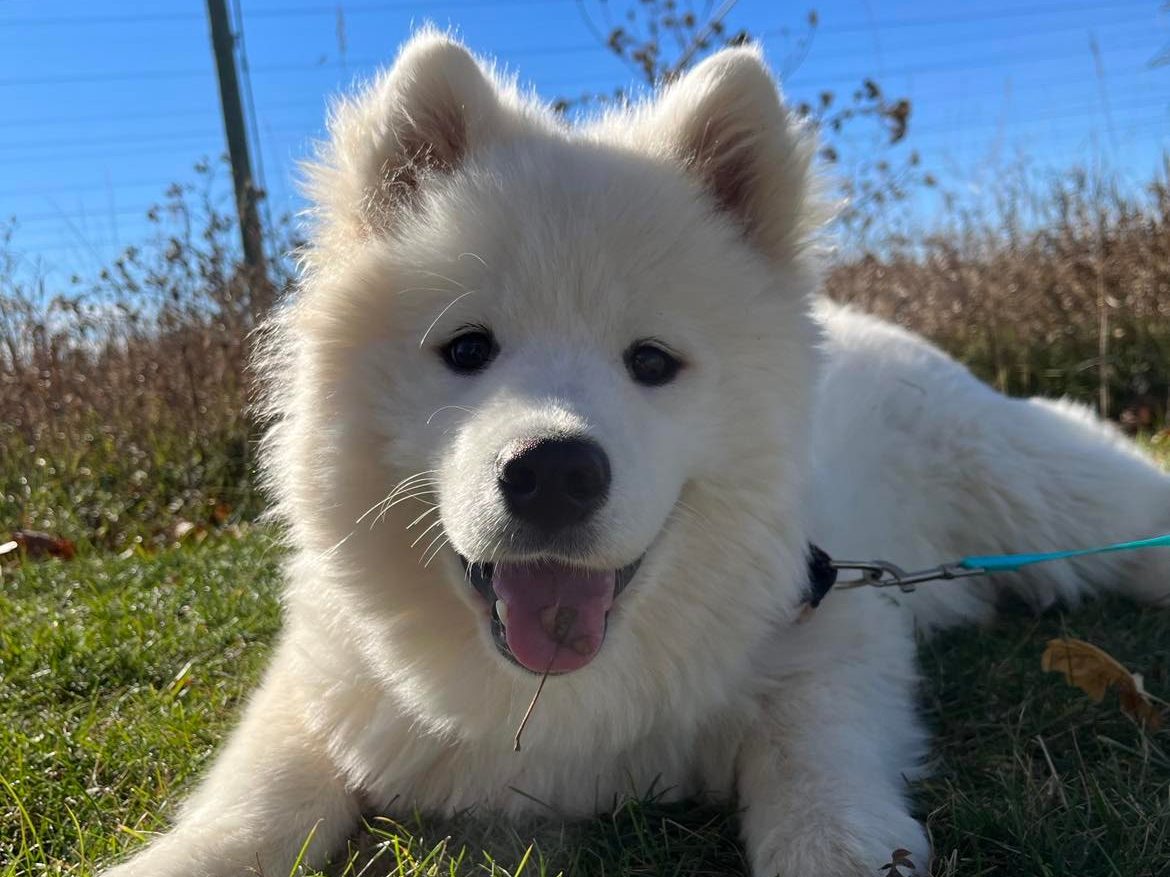 Sokka came to the HBSPCA through PAWS in Aug 2022 along with three littermates and three adults. In the weeks that followed, all of them except Sokka were spayed or neutered and then adopted.

When they first arrived at the HBSPCA, Sokka was underweight and smaller than his littermates. Not only was he covered in burrs but Sokka also appeared blind and showed lameness in his hind end. His blood tests presented no abnormalities and he was referred to the Mississauga Oakville Veterinary Emergency Hospital (MOVEH) for further consult.

Sokka’s assessment at MOVEH showed that his lameness and blindness were believed to be neurological, and during his stay at HBSPCA his lameness improved along with his body condition. We were thrilled to see his improvement and our team felt it would be in his best interest to be neutered and placed for adoption.

While waiting for his neuter surgery, Susan came into the shelter to view our other adoptable dogs and spotted Sokka. We had a long discussion about his past and his current needs, as well as what his future may look like. We agreed to keep her up to date on Sokka’s progress and let Susan know when he would be able to go home.

On November 21, Sokka was adopted. He now goes by Olaf and has been welcomed to his furever home with Susan and his big fur sister Rosie. 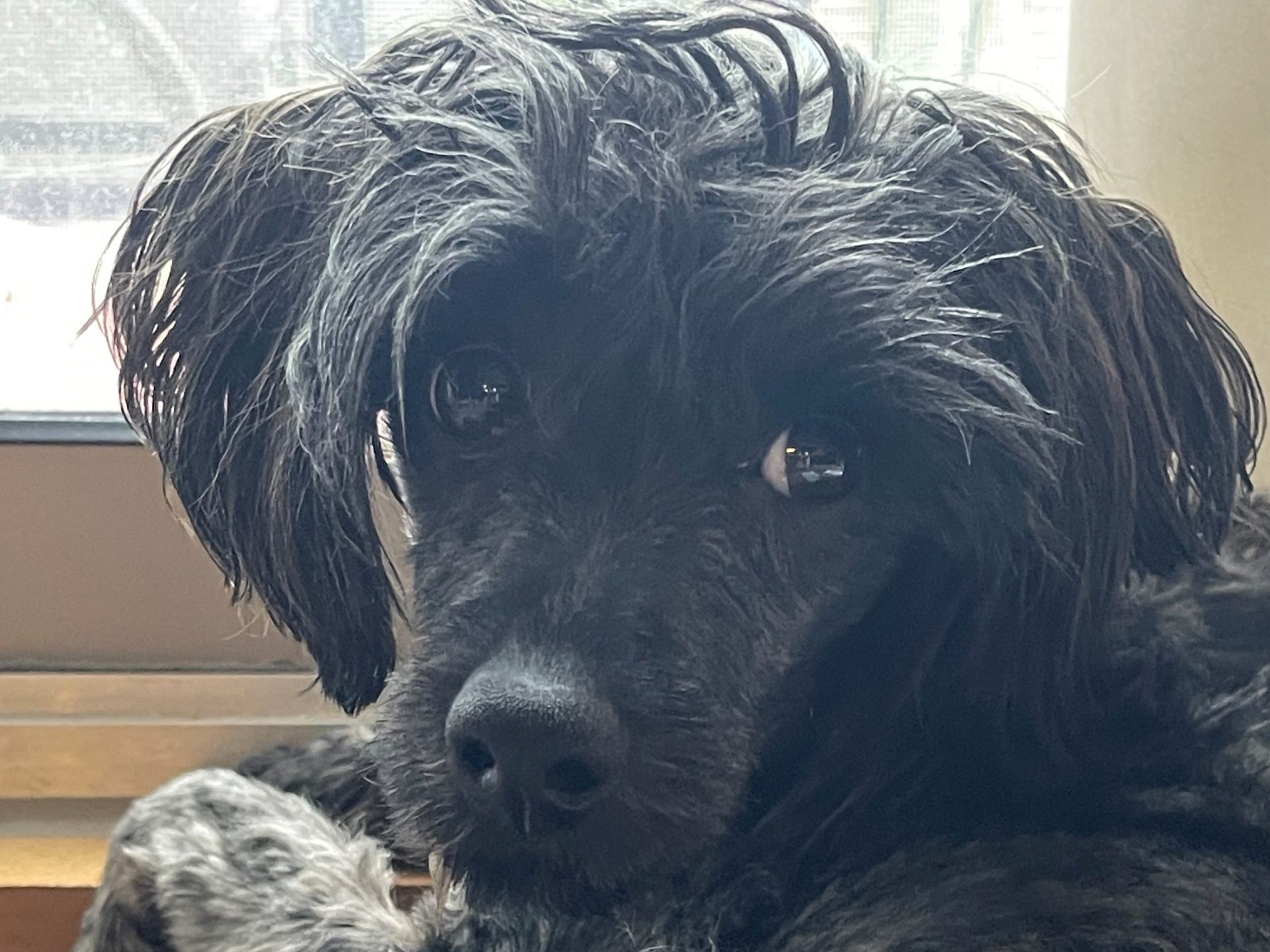 Our family is so grateful for the opportunity to adopt Bear. He is no longer the shy little man we brought home that first night.

He loves to snuggle and is happy as long as some part of him is touching one of us while he sleeps. He has made himself at home taking toys from the toy bin. A better name for him may have been Giraffe. His legs are so long that he can stand up beside me while I’m sitting on the couch and smack my cheek when he wants attention. He is my shadow and follows me wherever I go. He and Bob are getting along unless he is trying to take a treat right out of Bob’s mouth. He is loving being one of the HBSPCA “office dogs” and runs around like he owns the portable.

Thank you for completing our fur family! 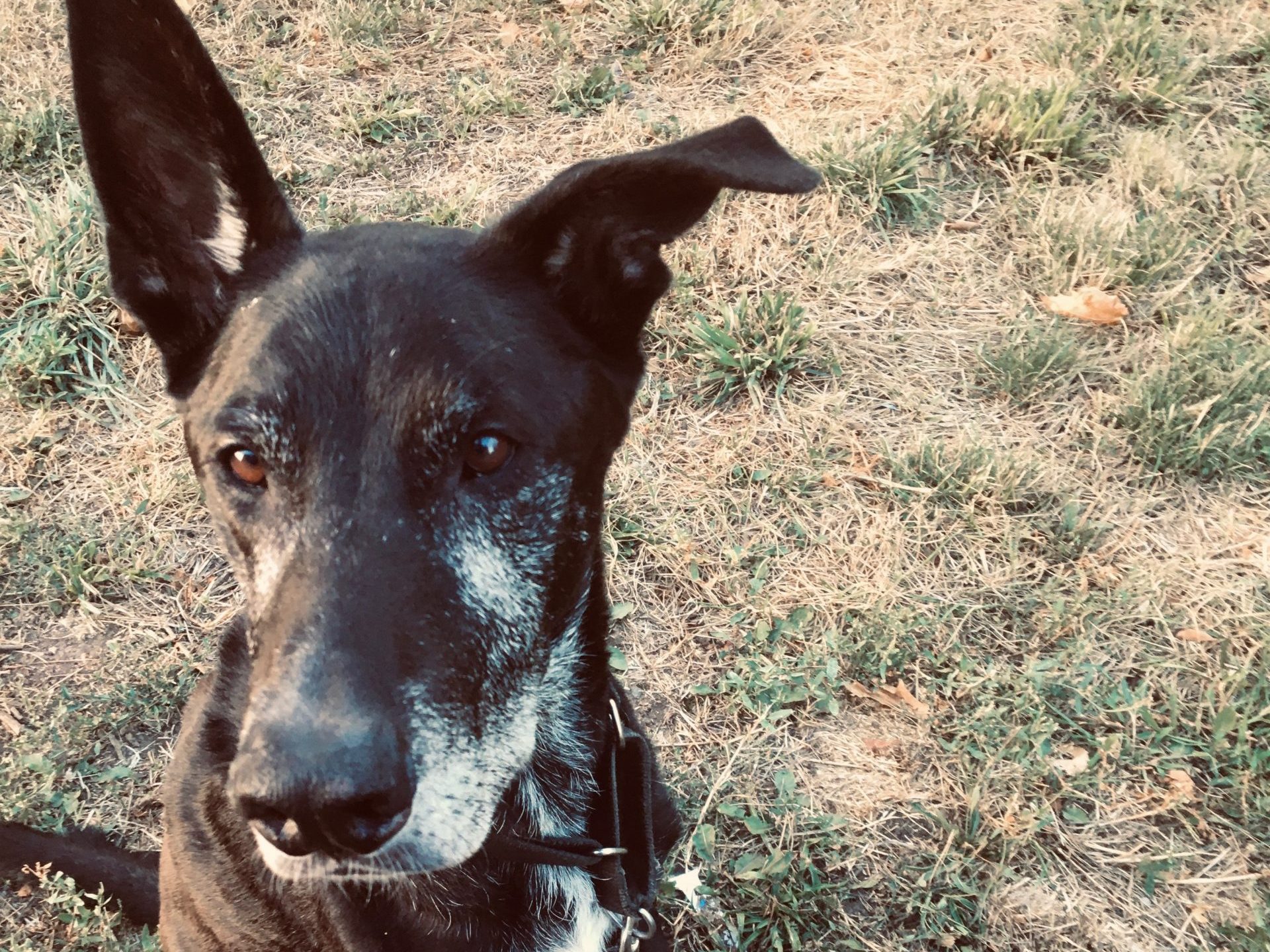 It’s me, Yuto, but you might remember me by my shelter name, Edamame.

Just wanted to give you an update on my new life: it’s going great!

I love my dum dum brother, George, he’s teaching me how to be a big dog and gives me cuddles when I’m not busy biting his face.

The cat is warming up to me, maybe one day she’ll realize me barking in her face is just me trying to get her to play with me. Who knows? Cats are an enigma.

Anyways, had my first road trip and played with my doggy cousins. It went great, everybody loves me because I’m sweet and the cutest.

Hope you’re doing well, thanks for helping me find my perfect home. 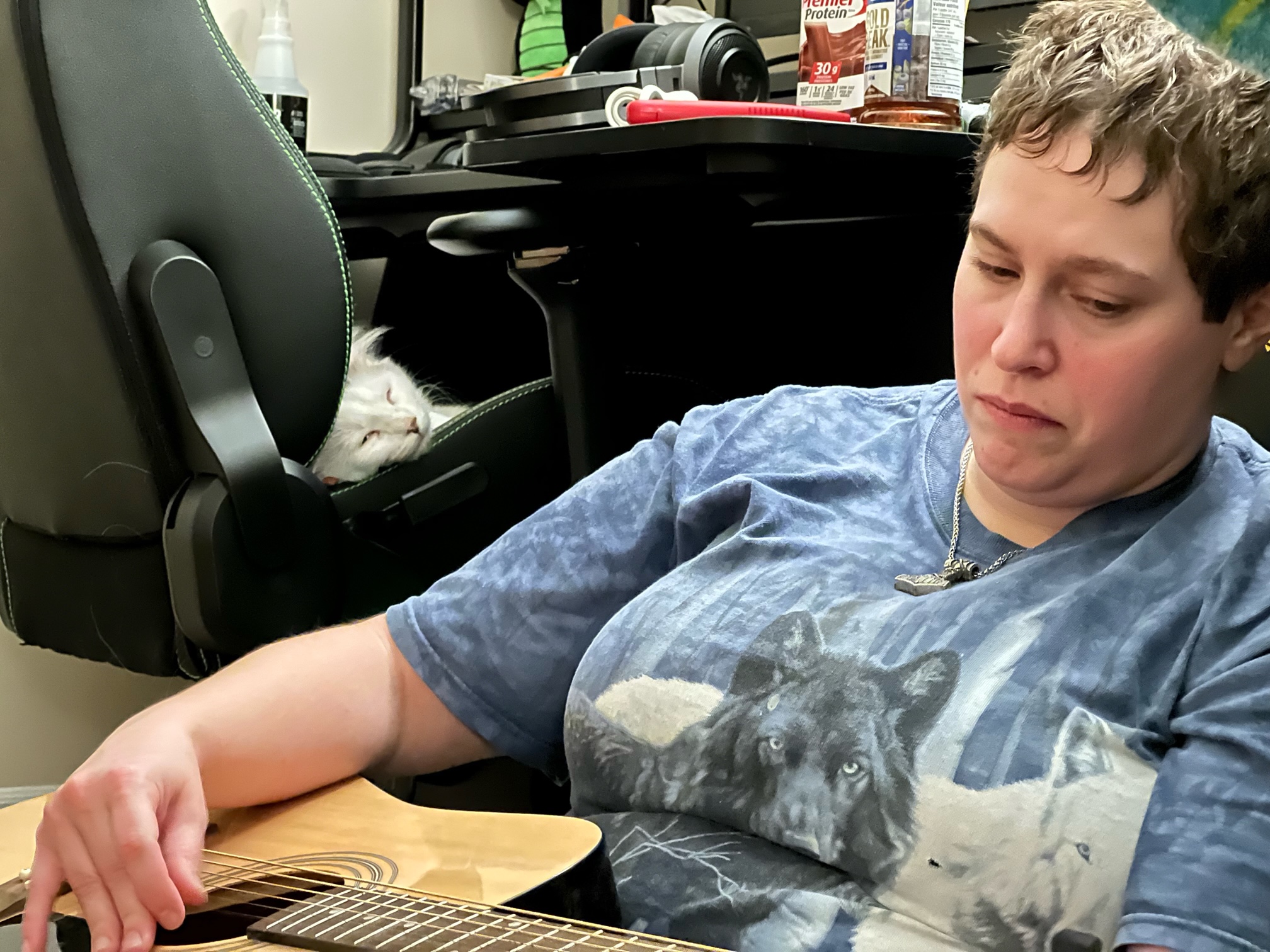 Seems like Piper is starting to settle in. Last night Sarah played the guitar for him for two hours while he lay in her chair. Seems like this boy loves music.

Last night he went exploring and at 1am we heard a crash. He got on to our computer desks (of course he laid on a keyboard) and knocked off a bag of cat treats. By the time we came to inspect, he was already huddled into the back of his tree box.

Today he vanished somewhere within the house. We found him INSIDE the back of the couch. The back opens by velcro (it’s a leather couch) and he managed to pry it open enough to get himself in… except for his butt. Poor guy. We opened the back all the way and decided the let him come out when he feels like it. He let us pet him softly for a bit (no hissing or swatting) before we walked away and turned on some music for him. When he’s hungry or has to go, he’ll come out.

While he has thwarted ALL our attempts to have him take his meds (except for this morning when he randomly took the pill whole without a pocket), it seems like he’s steadily learning to trust that we’ll just let him do what he likes. We have pulled his cat tree out of the closet and into the room we use the most. His carrier is now in the closet, which he uses as a safe house.
We’ve been discussing a change of name for Piper as we’ve noticed he gets tense when we say it. Given his apparent love for Final Fantasy X music, he may very well end up with a name from that video game. Seriously, he passes right out when “Zanarkand” was playing.
We’ll keep you posted as things progress. 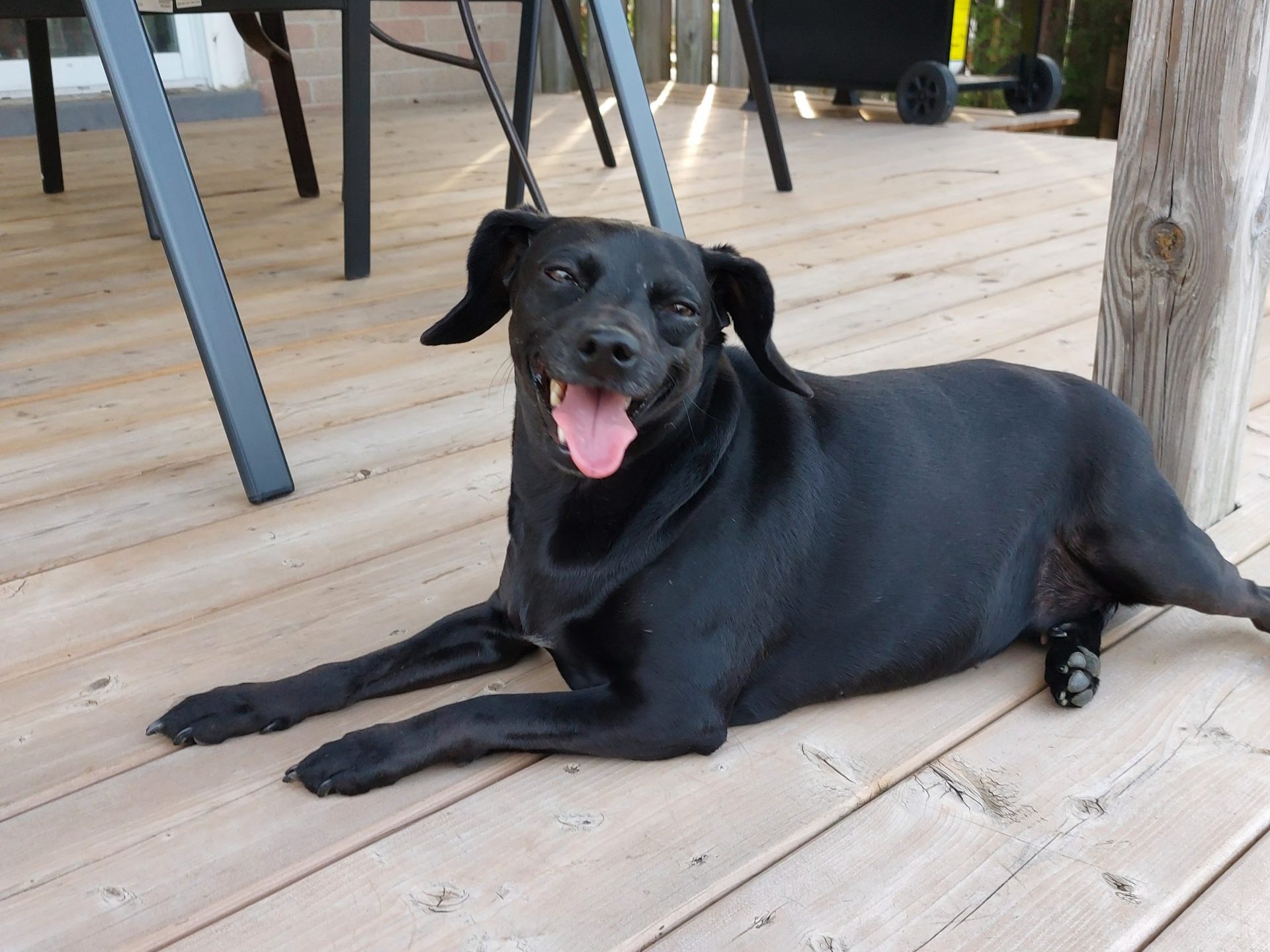 “I love my family so much and I’m doing great. I’m fully house-trained and haven’t had an accident in a long time. I love my brother Bear, he is so patient with me and even lets me sleep on him sometimes.

I really enjoy our daily walks and I’m much better on a leash. Cars don’t freak me out anymore but I’m still a bit nervous about the people walking toward me. My mommy and daddy are helping me work on that.

I’m shy around visitors that come to our house and tend to bark at them a lot, but mommy told me that will get better in time. I need to be around other people more, so I can get more comfortable with them and they with me.

I want to thank everyone at the SPCA for taking such good care of me and for allowing my family to give me a great life.” 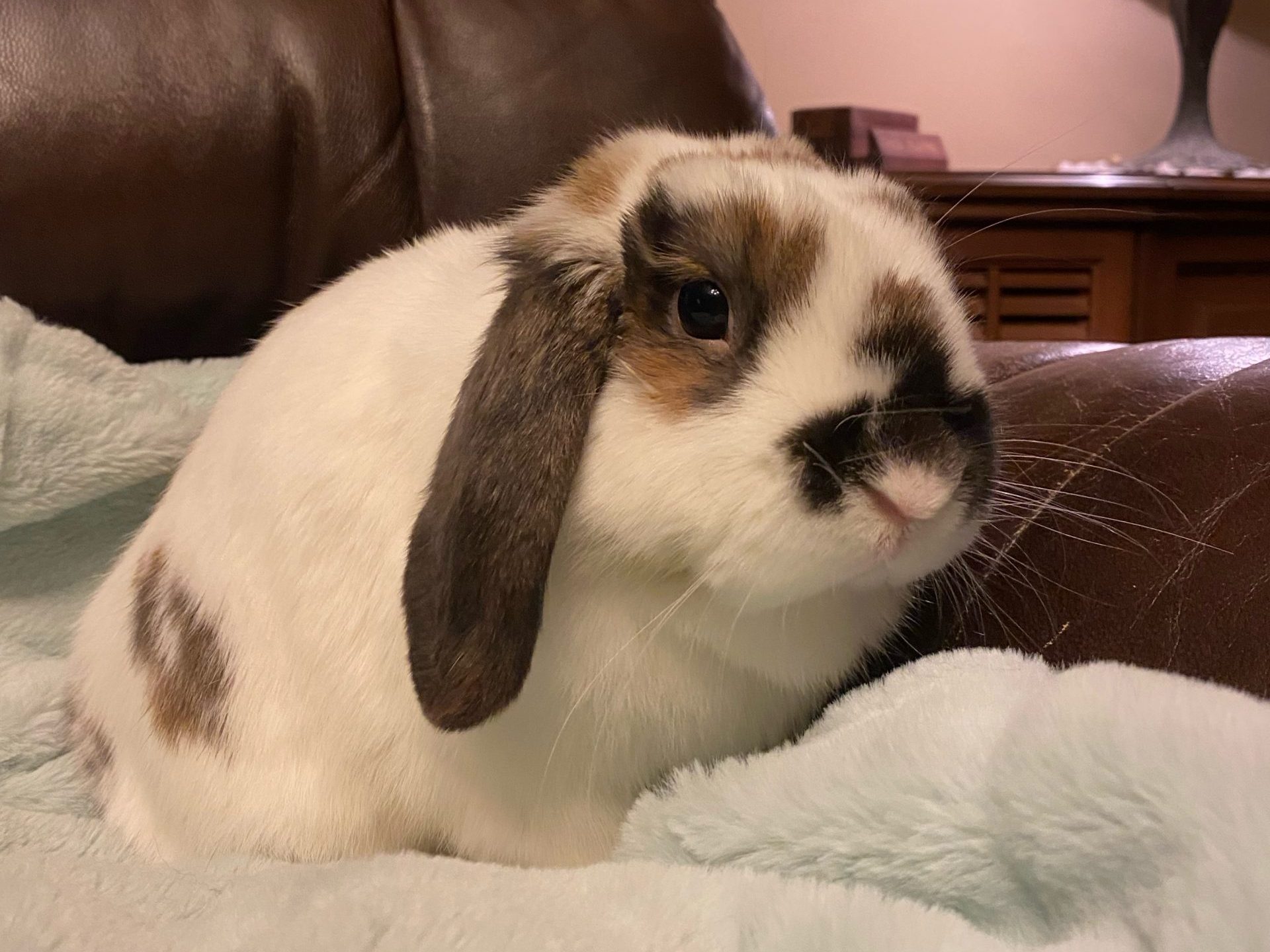 I just wanted to send you a quick update on Luca– he is very photogenic as you can tell!

Everything is going very well, and his razor cut has fully healed. He has settled into his home, and his personality has definitely come out – loves having his head rubbed and laying on the couch, is very curious and is always up to wandering around the house!

Thank you for all your assistance! 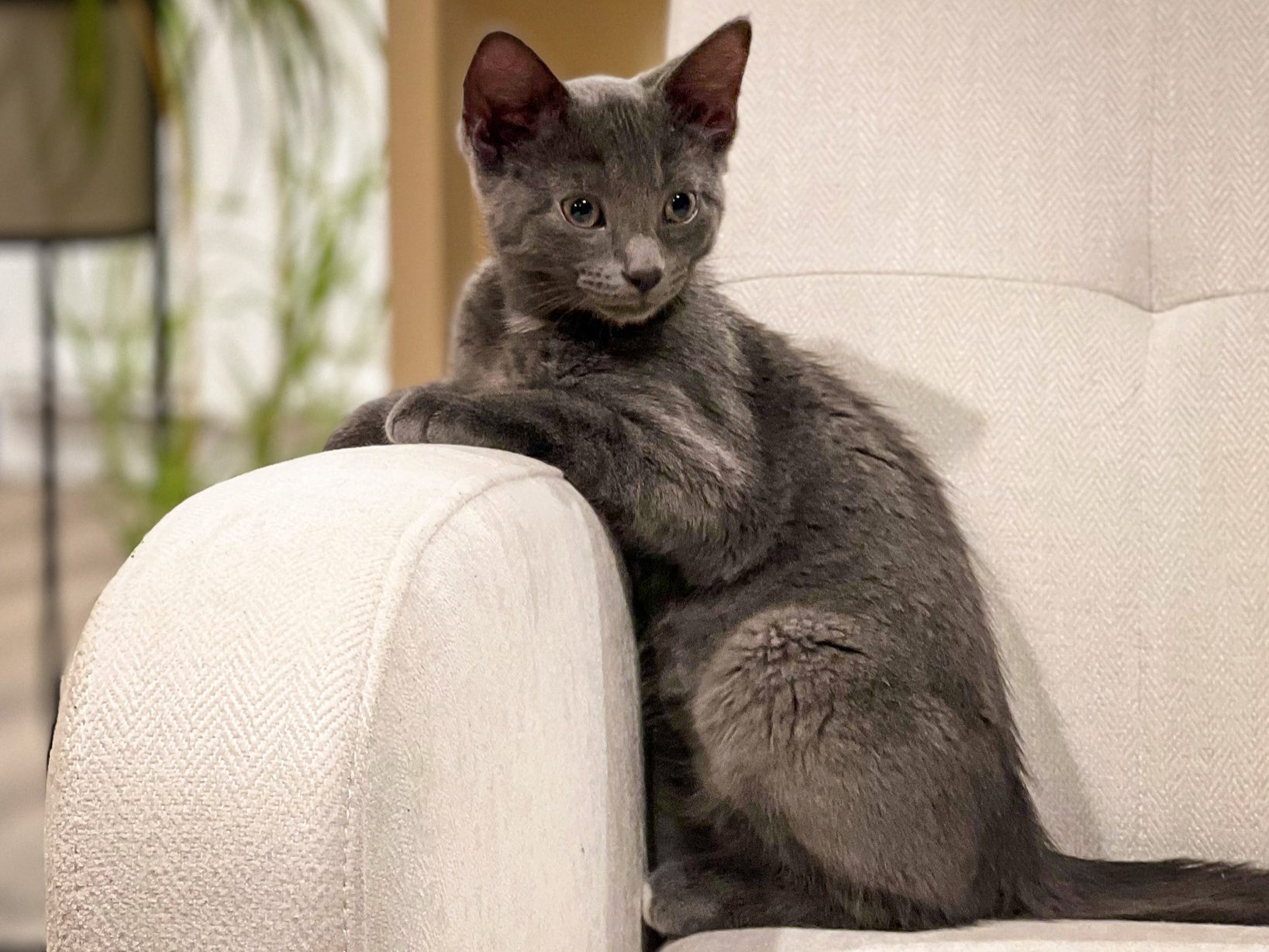 Once he came into our place, he was nervous and shy – as expected. We gave him his space and time to get comfy as you could tell he was a little bit afraid of what was happening around him. The next day he started hanging out with us, even sleeping right next to us! We tried to make him go back to his bed, but he would crawl into ours at midnight and snuggle close to us – that’s a good sign – we guess! Ever since his first couple of days, he keeps following us wherever we go, just yesterday we started letting him spend time together with us in our living room and I think he already knows he is the boss!

One of the things we’ve noticed so far is that he’s not into canned food (that much), we’re trying to mix it all up together with his dry food, but he’s been pretty picky with it. Other than that, I believe we’re on the right track!  We’ve also administered the milbemax tablet to him today as prescribed.

Thanks for all you do, we’ll keep you updated! 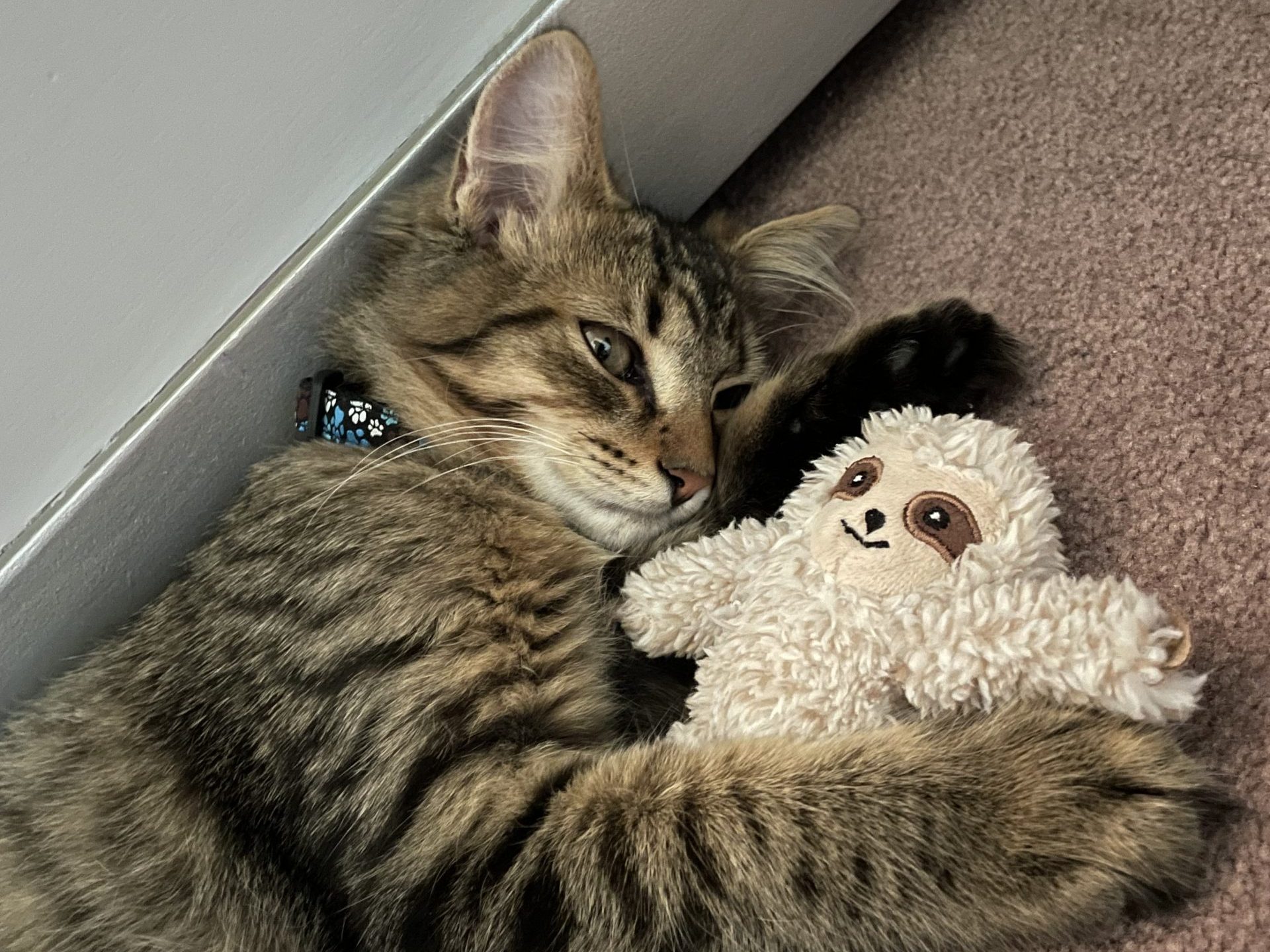 Mashed Potato is settling in very well to his new home! I’ve re-named him  Gary, but I’m keeping Mashed Potato as a nickname because it sounds so adorable.

He’s definitely a very friendly and adventurous little guy, and he’s already getting to know our other two cats. His neck seems to be healing well, and aside from a bit of scratching around the area, he doesn’t appear irritated at all.

I’ve attached a photo of him with his favourite toy, and I just wanted to thank you so much again for this wonderful little guy!

If you have space in your heart and your home and your life for a pet, we have several up for adoption right now. Maybe one will fit the curve of your heart just right. Meet them all.

If you don’t have space for a pet, we’d appreciate your support in other ways:

Maybe you know someone who wants a new furry family member. We’d love to introduce them to our ready-for-adoption pets.

Give a pet a temporary loving home until we can find them a fur-ever home.

3. Donate to support our work.